By looking at the picture below, you can clearly see one of the reasons why VR failed in the 90’s. The technology needed to even make this terrible VR experience could not be created small or light enough. 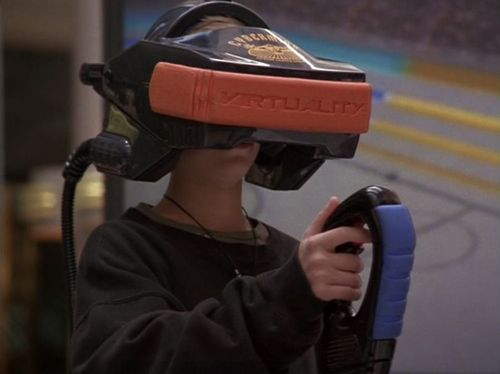 The first thoughts that may come to mind for most people when the term Virtual Reality (VR) is brought up, may be “dorky”, “a gimmick”, or “a failure of the 90’s”.  The first statement may be true still, but the last two are no longer.

For those who have no clue as to what VR is and what the hell the man in the picture above is where on his head, a VR headset allows you to visually enter other worlds, both real and man-made. The reason that VR is so different than watching TV or playing video games, is that it tricks your brain into thinking that you are in a different 3D world. And no, not like watching a movie in 3D that only allows you to see a few objects partially popping out of the screen. In VR, the controls to your spaceship look like they’re right in front you, while the planets and asteroids all around you look incredibly far away from you. Also, the cherry on top is that you get to look all around you. You can look up into the sky or turn around to see whats behind you.

The space battle game made for VR, EVE: Valkyrie-http://www.roadtovr.com/wp-content/uploads/2015/03/eve-valkyrie-fanfest-2015-screenshot-6.jpg

With the resurgence of VR in the past few years, it really seems as though it really is here to stay this time, as computing power is finally where it needs to be in order to create an immersive product that will have people wanting more and more.

Although the technology may finally be here, it is believed that in order for this technology to take off in the mainstream, is to eventually shrink it to the size of a pair of sunglasses. That way people won’t be afraid of how they look while using it, like the segway.

The possibilities for VR are essentially endless when you think about all of the different types of entertainment and educational fields you could experience at a greater level than experiencing the same content on a normal monitor. From playing video games where you actually feel like you’re in a space battle, to joining your whole class on a virtual trip to Mars or a journey inside the human body.